Modern Icons: The Sacrifice of Endangered Species of the American Southwest 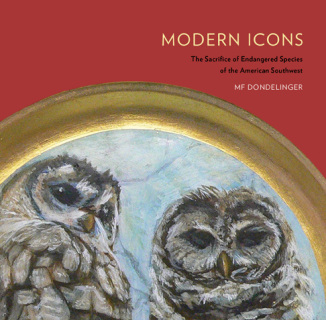 MODERN ICONS: The Sacrifice of Endangered Species of the American Southwest

$19.95
Add to Cart
In 2012 a jewel of a book featuring images of once familiar Southwest species rendered in exquisite detail was published. Short entries accompany
each painting describing the plant, animal or vertebrate and the cause of its
endangerment.

"Dondelinger's work always surprises. She juxtaposes the ancient art of egg
tempera iconography onto the most disposable of backdrops, the humble paper plate. The plate-as-canvas serves as a symbol of 21st century throwaway culture, just as the creatures she so painstakingly depicts (using precious materials like 23-carat gold, egg tempera and rabbit skin glue) have become expendable in our fast moving culture. In Modern Icons, Southwesterners will gain a new view of what is-or is no longer-to be found in their own back yards."

A copy of this book is being donated to every public library in New Mexico and Arizona.
Proceeds from the sale of this book will support another on endangered species of the American northwest.